Chess is a difficult game, in which the event takes place, and have their champions. Maybe gamble it seems only her fans, in mind who runs a real run of thoughts in search of a better combination. They calculate many moves ahead and remember the names of the games played. The audience can only watch the players sitting at the board and hope that they will soon illuminate. To learn how to play and very skillfully, open a free online chess games and play with a real opponent, the computer, or arrange simultaneous sessions with multiple players.

Chess with the computer

Eight knights in the seven

Chess Against The Rules

Course of the queen

To play chess with the computer, set the options you want in the settings and select which color figures want to play

The complex and addictive game of chess 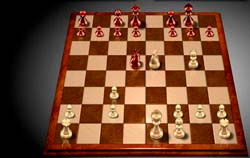 Today, the game of chess does not lead us into the divine awe and became familiar, even mundane. In many families there is a set of chess, which looks like a small, marching variant with magnetic base figures. Or the beautiful, stylish of their performance, where all elements reminiscent of the work of art – They are masters of the delicate work of carving in wood, bone or metal, but the figures themselves look unconventional, reminding soldiers in full uniform. The chess playing children and adults, but if you go to the park in the summer, you will definitely see on the benches notorious players, which is surrounded by fans, always ready to give useful advice.

Despite the fact that we used to take the game home, its roots grow out of the Indian culture of the sixth century. They say that chess originated on the basis of Chaturanga, and only then, when he was in Africa, Asia and Europe, have undergone changes. Acquired traits are familiar to us only in the fifteenth century, although they continued to evolve for some time, until the rules have not taken a single standard.

Everyone is familiar with such expressions as: checkmate. It is on these two components and shares the name of « », chess comes to us from Persia, which means – « King died ».

With regard to the direction of the gameplay, it can be attributed both to the logical, intellectual, athletic and Gambling. Chess held the Olympic competition, and although they can not be called a spectacular show, yet fans and a lot of them.

The computer version of the game of chess

The play chess professionals and beginners. The game develops memory, intellect, logic and helps in the study of mathematics. If you can not meet for another session, you will come to the aid the opportunity to play chess with the computer. To win his difficult, because the artificial intelligence keeps in memory all held successful and unsuccessful steps, but because it's a real challenge to their own abilities.

Virtual version of the varied and in addition to the traditional game of chess, you will see other proposals. Some are so colorful that it's hard to resist the temptation to practice the principle of the game, even if you've remained indifferent to it.
On the field of battle is unfolding in the whole animation, figures – soldiers, armed to the teeth. Their shape is in the details, and you can see's stripes, weapons and even buttons on the form. Busy people or those who can not leave home, can now play chess with the computer, improving their skills. There is no need to find a partner and storage board with figures, because chess online play allows virtually no extra devices.

Even stranger can keep you company for the evening, or to become a permanent partner, and we offer to play chess online without registration.

Now the game of chess has become almost exotic. New generation in the bulk of absolutely no idea of ​​how and why these figures move on a checkered board. And only few of them know that you can play chess with the computer. Which, incidentally, is just an outlet for fans of this strategy game. After all, to find a partner to play a couple of interesting games, becoming every day more and more difficult. A computer is always at hand. And it can not be called easy opponent. Sometimes these games make chess more filled with the spirit of competition than a battle with a real enemy. Many who set a goal to beat the electronic brain does not stop trying for months. And all to no avail!

Play chess with a computer can each. But only able to beat his man endowed with breadth of mind and truly open mind. These qualities mind can oppose pre-programmed and calculating machines. That imagination and flexible thinking, combined with observation, calculation, and strategic thinking to create a real players. Do you have a chance? You do not know until you try. In chess you can play online on the set of resources. But only the site www. game-game. com. ua, where you are right now, gives you the ability to play chess online without registration.