We are not afraid of the game Zombies online, but only when there were films about walking monsters, people after a session in movies afraid to go out alone. They felt that directors fantasy come to life. Today we can play for free, destroying zombies in droves, spraying fire, shooting a gun or throwing vegetables. These monsters though dangerous, but clumsy and destroy them easily. However, they are now also able to cheat and to learn, and sometimes because the matter must be approached with the invention.

Subject has repeatedly beat zombies. It seems nothing new from them will not wait, but the authors show the result of imagination and offer us to play new free online games Zombie. Revived monsters are still hungry. They do not feel pain and they are hard to kill, because they are already dead. But if they cut off the head, you will have a chance to survive. That's only when you are surrounded by crowds of monsters, your hand with a machete could not stand hard work. Then it makes sense to take advantage of other weapons, such as gorohostrelom.

All We Need Is Brain: Level Pack

Zombie at the Gates

Have A Nice Day

I saw her standing there

Jungle Dawn Of The Zombie

Base Zombies In Desert

The virus has turned people into zombies, and they want you dead 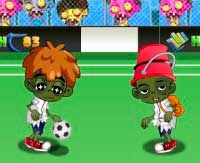 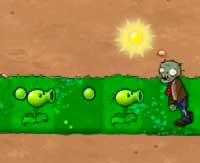 It seems that zombie we already know everything, but they are still the main actors of horror cinema, comics and zombie games. Everyone who wants to become a walking dead man knows that this should fall under the meteor rain; touch the radioactive objects; smell the dust, who flew from faraway planet or be at the epicenter of the cataclysm of the laboratory. Dying is easy, important, and then come back to life. But this can not worry – Scientists have figured out how to awaken you from the grave. It seems that their experiences are directed only to have to create as many walking dead, and I must admit, in this case they succeeded.

How do I become a zombie? – play online games!

Zombie Shooting Games will become a launching pad for the start of the war that raged between the people still alive and already dead alive. Should a zombie stick to your flesh, and you can be assured that you will soon fill up an army of them – it and multiply the corpses. However, despite the inconsistency of their existence, the zombies can be killed.

The method of killing zombies

Shoot! You can let them full clip of ammunition, but they are just a little bit to pull, as if in a dance, and continue your hunt. And if there is no sword, shot in the head as long as it does not explode.   However, cutting off his head, you can appease all the rebellious soul.

We arm peas! Wonderful game « Zombies vs. Plant » It offers a multi-level strategy with elements of the economy where your weapon against Ochumelov be dead plants. Each of them has its own striking power and from level to level the game online Zombies you will have access to different fruits and vegetables.

you land on the green lawns at your disposal culture and reflects the invasion of intrusive bodies, which, in turn, also mutate all the time and increase the attack power.

Cafe for the dead 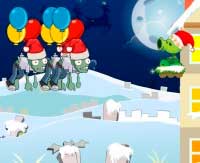 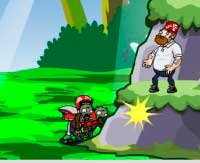 On this subject, invented many storylines, and some did not tally with our representation of them, such as a cafe for a zombie. In fairness, we recognize that a very useful idea.

On the other hand, we do kind of lure and now, if they lose their oasis, we again come to the opening of hunting. This means that you need to do everything possible to work around the clock restaurant, and the food it has been eliminated.

In the kitchen, all the ingredients are in store for culinary creativity. Where people usually place the cream roses, you'll stack:

The spectacle is not for gourmets, so the kitchen allowed only true fans of the zombie games online. 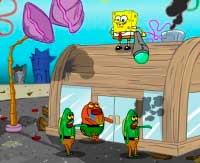 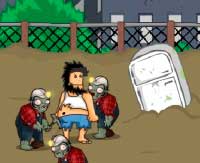 Live Monsters claimed to continuing an active social life, so do not be surprised to see them in a football stadium, ran after the ball and stand in the gate. They even have a support group with young girls zombies jumping in short skirts and waving pompoms. They also participate in races, skateboarding and playing baseball.

The zombies are coming!

In the virtual reality a man can turn into a zombie for many reasons. For example, due to contamination of the product, which is composed of genetically modified components – it's ketchup, candy, cola, hamburgers and other food. People trying this « Food », become insane monsters roaming the streets and attacking all those who meet there. A victim of zombies become as monsters – because the infection spreads in the world, destroying entire nations. Only the truly brave heroes can confront the monsters. They take up arms and come to grips with the zombies by cutting them with knives and swords or destroying their bodies firearms.

So brave do not need to look for long monsters, got out of their graves, because they're everywhere walk around the city streets. Fight the zombies can be: 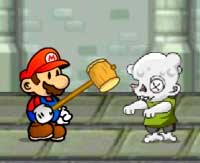 In its simplest form, shooting monsters on the screen is not visible figure of the hero and the weapons and the sight point. From a distance, begin to approach the dead, and you need to quickly put them so they could not come close too, because then the zombies will attack you and to reduce the stock of your health. Often in the course of the game you can not only shoot, but move your character in the virtual locations. It may be limited space in which all sides come all the new waves of zombies. The only chance to save the hero – it is to shoot monsters, trying not to let them get too close to him. Often a battle with zombies passes over a large area like the city. The character of this game can take to the streets, to enter the premises. Everywhere it greeted the dead, and he is ready to the last bullet to shoot them. Zombie games often limit the amount of ammunition, but they can fill up with special artifacts, as well as research areas to find more powerful weapons. Sometimes for the victory in the destruction of zombies are awarded experience points that can be spent on improving the characteristics of the hero. There are games in which it is necessary to destroy the zombies with mines. In each level, the dead hiding in the protective structure, but you have a limited amount of explosives, which would be enough to not only destroy the building, but also pin down the monsters of its debris.

The zombies, you can shoot a gun – Dead are located at a distance, and you need to determine the angle and power of the shot to the kernel exactly fall on them. Some Zombie games allow organized groups fighting against the zombie threat. For example, you can lead a group of survivors that barricaded themselves in several buildings and is trying to revive the human civilization. Try these and many other mini-games with zombies in this section of our site!