Before you online game Bleach with the ability to play for free. Our hero is brave and practically unbeatable. But it is sad "but" that spoils everything. However, we worry about his fate because he is in good hands – your hands. Now, no one monster can not stand before your attack, and each defeated enemy, is your deserved points. But there will be more responsible and test – meeting with Naruto. Both fighters – goodies, but each defends its honor and territory. It's time to cross your arms and reveal the winner. Sometimes, Naruto goes on a trick and clones himself to surround Bleach.

The fight against Naruto Bleach

Games were a continuation of Bleach manga and anime

The young god of death 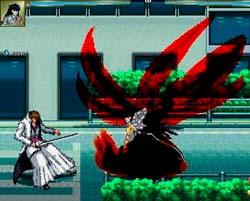 Fans of manga and anime will become regular visitors headings contains the most popular games Bleach. Here is a young man of fifteen Ichigo, which develops the power of the gods of death. To live with such abilities is not easy, and even more so to be ordinary teenager. His fate – fight the demons and restless souls of the dead, sending them to the afterlife. Ichigo is forced to fight against evil forces and save those who are in trouble. He was destined heroic future, and your help is very important to him. To become a real conductor of souls, it is necessary to persist for a long time to train, strengthen willpower, spirit and body.

Martial Arts in the program include the necessary direction that harden a person, making him focused and resilient, able to recognize good and evil intentions. Our hero brought an experienced mentor who hones his skills. Training can take place in different environments, because in the future hero to fight in the most unexpected places, encountering different evil. Perfume attack on one and group surrounding the youth from all sides. After losing vigilance, you can pay for a sign of weakness. But for each defeated enemy to earn points, which stimulates the accomplishment of new victories.

A variety of games Bleach 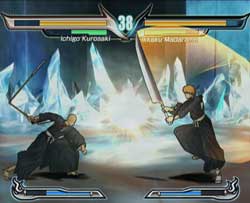 Game Bleach vs. Naruto show you a spectacular fight, even where there are tricks. Small Hitsugaya aspires to become a useful « Community shower » and hard training, strengthening their spiritual and physical strength, armed with a massive sword. He challenges Naruto Uzumaki and, once in a whirlwind of light, repel the attacks of the enemy, attacking from above. Gradually, you will have a super power capable of sweeping away anyone. Wait until it reaches its maximum and obrushte the enemy. It loses vitality not only the enemy, but also your hero. Watch out for his condition to scale and do not let the enemies get close to him butt.

The most common games Bleach, it is a fight, but there are areas where the characters have to wear. Their wardrobe is dominated by the Japanese national dress, so you learn to recognize them in the future on certain characteristic details. True fans of the manga have to know such details, so as not to get trapped. Of course, there are games and we Bleach for two. This is natural, it is far more interesting to fight the real enemy. Invite a friend or family member to the keyboard and to arrange which one of you will own arrows, and some letters in order to control your character during Bleach fighting game. Accumulating forces, you will soon become a true demigod, that does not leave a chance to continue their souls wandering the earth. Their place in the next world, where they can not harm the living, and it's the law!

Each game and completed level brings you closer to the divine essence, strengthens the spirit and hones skills of combat. Fight bravely, the enemy did not feel your doubts. In your case, it is unacceptable, because the mental body sensitively feel any wavering souls to wreak havoc there. Let your hand be hard in order to keep the sword, and the internal state firmly that no doubt admit that your cause is just. Remember that you are a warrior of light, and it will strengthen your mind. Suppose you have doubts surrounding it, but if you do be sure in their abilities, you can easily overcome all difficulties and reach the goal to become a true master. Do not miss the opportunity to train – This is the best way to be exalted above those who do not trust you. And when it's a crucial stage, you are ready to join the battle and save the situation.