At the boys always find an excuse to shoot and fight. So better that it happens during war games online than on the street. There are free to play, speaking against the enemies of different suits and class, whether the royal army, or gangs, aliens from outer space, or the rebels dead. Against everyone will find their weapons, but to attack and defense to be effective, do not underestimate the enemy. They also know how to fight, and the weapons they have no worse than yours. Collect squad diversify its arsenal and set up the guard tower on the perimeter of the path of the enemy.

The best War games for boys

Plazma Burst: Forward to the Past

Cactus McCoy 2: The Ruins of Calavera

The Expendables 3: Deploy and Destroy Reloaded

Clash of the Olympians

Ace of the Sky

War games are the most popular category of games for boys

Voynushka - style of life of this man! 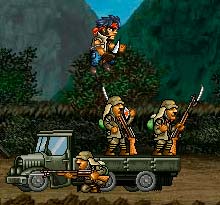 The boys rarely play with bobblehead, but even those who rarely allows himself to bring them to the eye, still remain true fans machines, rifles, pistols, slingshots. They know all brands and well-guided weapons in combat tactics. Their favorite game - run around in the yard with friends, arranging voynushki. In their personal arsenal there will always be a couple of toy firearms, grenades, mine detector, binoculars, swords and bow and arrows. In summer you can hide in ambush behind a bush or tree, and in the winter the game takes on a new flavor. In the yard grow snow forts, shelters, and snowballs are converted into lethal weapons - grenades. But it happens that the weather does not conducive to walks and games and then come to the rescue of computer games for boys voynushki. This is no less exciting experience, since the products offer a lot of opportunities and ways to feel like a general, or grow up to it, starting with the title of the ordinary soldier.

Games for kids and adults

These games are presented in such a variety that even a long-matured young men can not resist the temptation to undermine anything or shoot a couple of dozen opponents. In realistic simulations you can play not one day, but we offer to pay attention to flash games that you will not take much time and can be for one night only to get acquainted with several options in this genre. Play voynushki online is simple and does not require special knowledge of military art. But in this and their charm. Very often, these games are filled with a peculiar sense of humor, and the process benefits from unconventional plot represented. A plausibility - it is not necessary component for such entertainment.

The Conquest of Space

War in the air, on land or in the water under it - the main thing is that you like what you see. You can fight, driving tanks, planes, submarines, space rocket or a fantastic machine. Games voynushki - a game for the brave soldiers who have a sense of humor. Since ancient times, the boys had one very simple game - voynushki. Precise rules no one knows, and they had not been. The basic idea of ​​such a game - a confrontation between two opposing forces. In the course went all - water cannons, hands, sticks. Probably in the blood of men's aggression it takes a lot of space, despite the fact that modern society no longer requires them of martial skills. With the advent of the first computers voynushki transported to the virtual space - shooters almost the same age of today's personal computers. We offer you and fight on the battlefield, playing games online war games.