Once Bruce Banner worked in the laboratory over the next invention, but made a mistake with the calculations that led to the tragedy – he became a monster, the monster, green and ruthless Hulk. His story is known from Marvel comics, but now you can play free online games Hulk and accompany the hero in the fights, or a fit of rage. At such moments, it is ruthless, aggressive and relentless. He was easy to deal with an army to destroy the fist high-rise building, rip like a blade of grass, centuries-old oak tree, flipped cars like this toy models.

Revenge Of The Hulk

Heroes of the Evolution

Find the hidden numbers in the image

Hulk with Friends - Fix My Tiles

Revenge of the Green Giant

Wolverine vs Hulk: Sort My Tiles

Hulk: Face Off - Fix My Tiles

Hulk Out Of Defense

Wolverine vs Hulk: Sort My Tiles

Hulk: Face Off - Fix My Tiles

The history of The Incredible Hulk 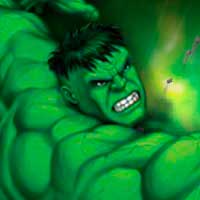 The world is incredibly rich in fantasy and rich in imagination. Its authors filled it with magical creatures, awakened trees, united mutants. But what is most remarkable in this universe has no boundaries and can inflate its inhabitants endlessly inventing new characters. Some are an integral part of nature and are born with it, but others have appeared thanks to the efforts of man. Frankenstein monster and invented his awakened it to life, creating from different parts of the body. And Hulk has become the embodiment of evil because of the clumsy behavior of Dr. Bruce Banner, when he conducted research on gamma-bomb in his laboratory. When a powerful explosion occurred, the doctor has undergone its influence, and miraculously survived, but its genetics has undergone significant changes. Now, he is angry as it awakens Hulk – Huge green and uncontrollable monster.

This story was invented Stan Lee and Jack Kirby, and the debut of the comic book « The Incredible Hulk » He held the first of May 1962, making the Hulk in the part of the hero of the magazine Marvel Comics. It should be noted that the first mutant was not green, and gray, as editor in chief chose not to refer the Hulk to any ethnic group. But because the chemical industry of the period, which produces paint, could not stick to the precise technology in shades, monster from release to release acquired the green, then gray again. To avoid further confusion, it was decided to stop on the green, and even rewrite the first issues of the comic book, which was mentioned about his painting. 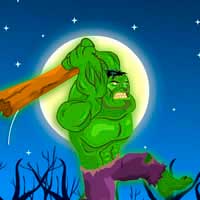 As to the nature of the Hulk, it is easy to guess that he was aggressive, dangerous to others and unbalanced. At one glance it becomes clear that no agreement will better lam. Hulk smashes all around and only returned to human form, it wakes up in the horror of the offense.

The successful comics are often the source of by-products

Games Hulk, we have prepared for you, reflect all the rage monster inside, ready for any military action, only to throw out the anger, splashing over the edge of the green his soul. Special repeats the story of the original do not wait, but the use of force will have over and over again. Even if it is a quest or walker, the Hulk still can not help but turn the structure around them in ruins and not to pin down a couple of dozen bystanders. This is just the hero, which is not to say that he fights against evil, as he is named. But to measure themselves against other beasts, he is always happy, and if you send 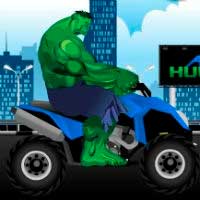 with him to the Olympic Games, will be able to do to take part in sorevnovaniyax. Despite the fact that the Hulk virtually unbeatable, his opponents have no less power and are ready to furiously fight for their lives. Hulk game – it is always a fight without rules. A which may be conditional, if you seething hatred? By controlling a hero, you'll terrify the inhabitants of the city, walking to his full gigantic growth and destroying houses around him, tearing trees from the ground as small grass, crushing cars soles of bare feet and crumbling asphalt as glass.

After enjoying plenty of destruction, fights and explosions, you can play the Hulk, finding